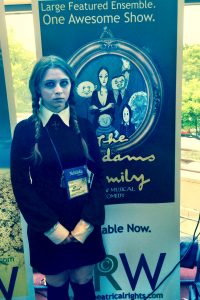 One of our biggest and best opportunities to meet our customers happens at the end of June each year in Lincoln, Nebraska. The Educational Theatre Association’s (EdTA) International Thespian Festival is held in this lovely and welcoming city each summer on the campus of the University of Nebraska. This year, nearly 4000 Thespians and their directors descended on the festival by trains, planes and automobiles (OK, mostly on 17 hour bus rides) and attended hundreds of high school shows and workshops with world-class presenters and teaching artists.

Team TRW attends the festival to have facetime with the people who make theatre happen with high school kids from around the globe. From as far away as Canada, London, Dubai, Qatar, and Saipan and Mound City, TX and…everywhere, these young people and their teachers come to show what they can do and learn more about their craft as they meet their peers and share their stories. The connections are real and they are invaluable as the world of high school theatre is elevated and celebrated through the magic that is the EdTA International Thespian Festival.

Complementing our convention headquarters in the lobby of the beautiful Lied Center for the Performing Arts, we lead a series of workshops at the festival that promote our musicals through sharing our experiences, our stories and our love of theatre arts. Our session focusing on MONTY PYTHON’S SPAMALOT takes on the casting, directing, marketing and themes of the show, while discussing its production history and design elements. As happens throughout the festival, the resulting discussion is a great venue for getting and giving ideas and sharing the challenges and rewards of this amazing world of the high school musical. The whole company of the Thespian Musicalworks 2014 (Photo by Jim Talkington, courtesy of EdTA)

Musicalworks is a program designed to promote original musical writing by high school Thespians. It also gives student lyricists and composers the chance to workshop their creation with working professionals and student musical theatre actors. Beginning each October, aspiring Thespian writers submit only the opening number to an original musical for review the Musicalworks staff. One is chosen for workshop and a performance at the annual festival. If you are a young writer of musicals, or mentoring one, you can find out more on the Next Generation Works page. In our new titles workshop we explored the brand new Broadway musical releases BIG FISH, THE ADDAMS FAMILY and GHOST THE MUSICAL. Their connection is death and it’s a perfect theme for musical comedy…and drama. Our Workshop Pro is TRW’s Director of Licensing, Jim Hoare, a 30+ year veteran of teaching and directing high school theatre. Upon retiring he was promptly hired by TRW’s President & CEO Steve Spiegel, a longtime leader in industry support of educational theatre, as the company’s Director of Licensing. Over the years of his teaching career, Jim brought hundreds of student actors and scores of shows to the Thespian Festival and is now a rock star for TRW at the convention.

“Whether I was the director of a mainstage production, directing a one-act or helping another school’s late-night strike backstage, my time spent at the International Thespian Festival was a highlight in my 31 years teaching high school theatre. When the opportunity arose to return to the festival as a workshop presenter, adjudicator and vendor for TRW, I was thrilled. The dedication, commitment, and sheer joy for making theatre displayed by students and teachers alike is inspiring.” His empathy and understanding of the unique challenges for high school drama teachers is unparalleled in the licensing industry. It’s a joy to watch him interact with the hundreds of teachers and students he connects with here each year.

The workshop takes a look at the theme of mortality in musical theatre history then examines that theme and its looming presence in FISH, ADDAMS and GHOST…and every other show ever written. The discussions with these directors never fails to amaze us as they make clear why they are leading top-notch drama programs for their schools and students. The value we get from being able to meet with them one-to-one is immeasurable. This pic says it all: Happy Thespians on the bus! (Photo by Cori Johnson, courtesy EdTA)

The EdTA’s commitment to educational theatre is not limited to high school drama. They present a growing Junior Thespian Festival each year for Middle School/Junior High programs that is vital in creating a professional enrichment experience for the all-important drama directors and actors at the 6th-8th grade level. Their festival is a welcoming place where schools can present titles from any licensing company, making it a true festival environment. TRW is proud to be an ongoing sponsor of the Junior Festival, coming up in March of 2015 in Nashville, TN.

If you haven’t attended a Thespian Festival with your troupe or you aren’t a member of EdTA yet, you can find out all about the benefits at www.schooltheatre.org. It’s a week that zooms by, and over all too soon. Jim noted, “At breakfast on Saturday morning, a first-time attendee said how surprised she was that the week flew by so quickly. I said that it’s like when you’re in a great show – you’re never aware of a moment while you’re in one. It’s only when you leave that moment at the end of the show (or during a curtain call) that you become aware that you had one. I am grateful for the ‘moments’ spent at Thespian Festival 2014. It was a quick week – and I look forward to 2015!”