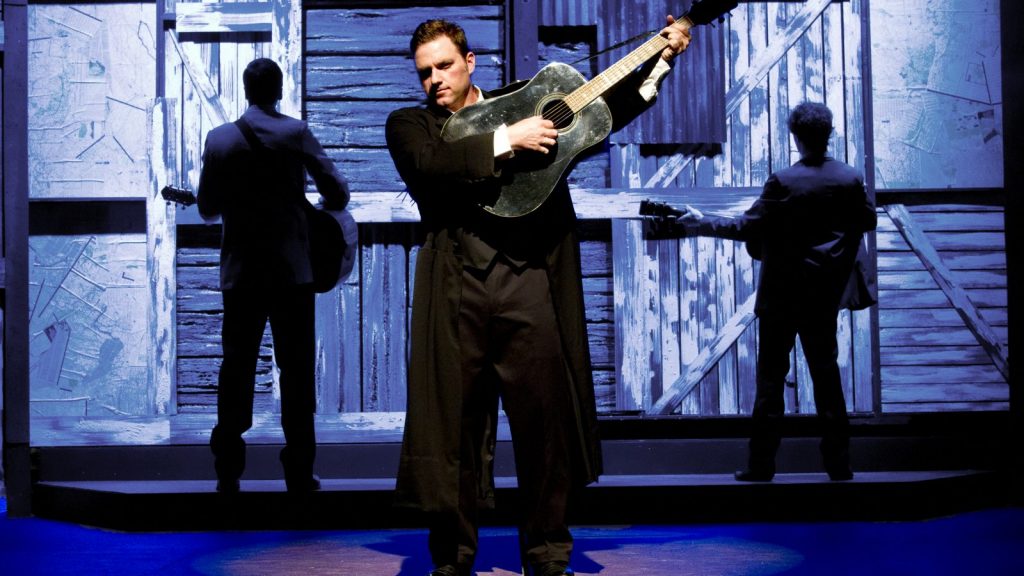 The Des Moines Community Playhouse is widely recognized as one of the top community theatres in the nation. Leaders in the true spirit of creating a theatre for the community, their latest show, RING OF FIRE: THE MUSIC OF JOHNNY CASH celebrates the Man in Black, his times and his amazing music. Born a poor Arkansas boy, he picked cotton on the family farm before embarking on a 50 year career in music that includes more than 1,000 songs, 17 Grammys, and more than 90 million in album sales. Johnny Cash is still one of the most popular entertainers of all-time. The Broadway bio-musical tells Cash’s story of faith, family, passion, redemption, and salvation. A gifted cast of singers and musicians presents 30 of the gifted artist’s hits including “Daddy Sang Bass,” “Jackson,” “Folsom Prison Blues,” “A Boy Named Sue,” “I Walk the Line,” and, of course, “Ring of Fire.”

Ring of Fire was created for it’s Broadway run in 2006 by Tony Award® winning musical theatre giant Richard Maltby, Jr (Miss Saigon, Ain’t Misbehavin’). Maltby said of RING OF FIRE, “…in many ways, Johnny Cash wrote and sang about the lives we lead, regardless of where we lead them. If, watching this show, you feel yourself being drawn back to your roots, it isn’t accidental—even if you’ve forgotten what those roots are. I hope, as we bring to life these wonderful songs, we will touch your heart, mind and soul as well, and take you back to part of your life you may want to return to.” Maltby’s brilliant take on Cash’s music as a vehicle for a musical theatre piece brings a new perspective on the legendary musician’s epic body of work. Maltby continued, “…taking all the songs together, adding in the life he led, the person he was, the people he knew, loved, and sang about, it seemed to me that there was another story here. It’s almost a mythic American tale—of growing up in simple, dirt-poor surroundings in the heartland of America, leaving home, traveling on wings of music, findi ng love, misadventure, success, faith, redemption, and the love of a good woman—and eventually returning home. It’s about the journey of a man in search of his own soul, which is in fact what emerges when you consider all the details of Cash’s life together. That seemed to be a worthy story to put on a stage—and the best part is we could tell it entirely through the songs.” Songs that the talented DM Playhouse cast are ready to deliver throughout their 18 show run!

According to the Des Moines Register’s pre-show press for the DM Playhouse RING OF FIRE, the show is a great ticket-seller to a traditional theater audience and gives the Playhouse a chance to reach out and catch the ear of Johnny Cash fans. “I don’t like country, but I do like Johnny Cash” is not an uncommon phrase to hear, and the singer’s collaborations with people like Bob Dylan and Beastie Boys producer Rick Rubin ensured his music reached well beyond honky-tonks and country radio. Cast member Randy Burk agrees, saying, “…to me, it’s pretty simple. Johnny Cash transcends every class of pop,” Burk said. “He has a song for just about everybody. The honesty of his songwriting, the stories he tried to tell and the lessons they have about love and life and religion are amazing. It would be hard to go out on the street and find someone who doesn’t love Johnny Cash or who doesn’t have something good to say about him. That’s rare for an artist.”

In addition to Burk, DM Playhouse’s production of RING OF FIRE features Elisabeth Ballstadt, Douglas Cochrane, Preshia Paulding, Sarah Stallman, Dane Van Brocklin, and Ben Wantland, backed by a five-piece band. RING OF FIRE is directed by John Viars, with musical direction by Brenton Brown and choreography by Alison Shafer. The Playhouse is also introducing two new programs with RING OF FIRE: Audiences are encouraged to come to the theatre 45 minutes prior to curtain for a pre-show talk about the show. After the show, on Friday and Saturday evenings, audiences are invited to stay for live music and drinks in the lobby. Party on, Des Moines!

The Playhouse is Iowa’s oldest and largest producing theatre. The organization has presented a full season of shows since 1919 and also offers a wide variety of educational experiences including classes for ages 4 to adult, theatre trips to New York, and volunteer opportunities onstage and backstage.

For information on licensing YOUR production of RING OF FIRE, click here to visit the show’s homepage.