Profiles, interviews, & news about the creative minds that make our musicals possible

Congratulations to Peter Mills, winner of the 2010 Kleban Award! TRW author Peter Mills, the book, music and lyric writer of ILLYRIA, was awarded the prestigious Kleban Award, annually given to both a librettist and a lyricist. Also receiving this year’s award is Barry Wyner, wrote the music, lyrics and book for CALVIN BERGER, a new version of  “Cyrano de Bergerac.” 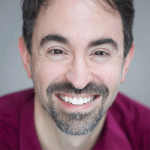 Peter Mills-Winner of the 2010 Kleban Award

Mills wrote ILLYRIA, a beautifully realized musical adaptation of Shakespeare’s “Twelfth Night,” in 2001.  The adaptation of the comedy is credited to Mills and Prospect Theatre Company’s Artistic Director Cara Reichel. Noteworthy productions have included two runs at New York’s  Prospect Theatre Company in 2002 and 2009, and the regional premiere at The Shakespeare Theatre of New Jersey in 2004.

Recently, Peter wrote music and lyrics for Golden Boy Of The Blue Ridge, a critically-acclaimed bluegrass adaptation of J.M. Synge’s Playboy of the Western World set in 1930s Appalachia. He received the 2007 Fred Ebb Award for emerging songwriters, 2006 Drama Desk Award nominations for his show The Pursuit Of Persephone (Best Music and Best Orchestrations), the 2003 Richard Rodgers New Horizons Award from the ASCAP Foundation, and a 2002 grant from the Jonathan Larson Performing Arts Foundation.

The Kleban Award was established by Edward Kleban, an American musical theatre composer and lyricist. Kleban wrote the lyrics for A CHORUS LINE, winning the 1976 Tony Award® for Best Original Score.

Peter holds an M.F.A. in Musical Theater Writing from New York University’s Tisch School for the Arts and a degree in English/Dramatic Literature from Princeton University. He is a founding member of Prospect Theater Company.

Edward Kleban created the Kleban Foundation in his will. The annual awards, each in the amount of $100,000 over two years, are given to the most promising librettist and lyricist in American musical theatre.