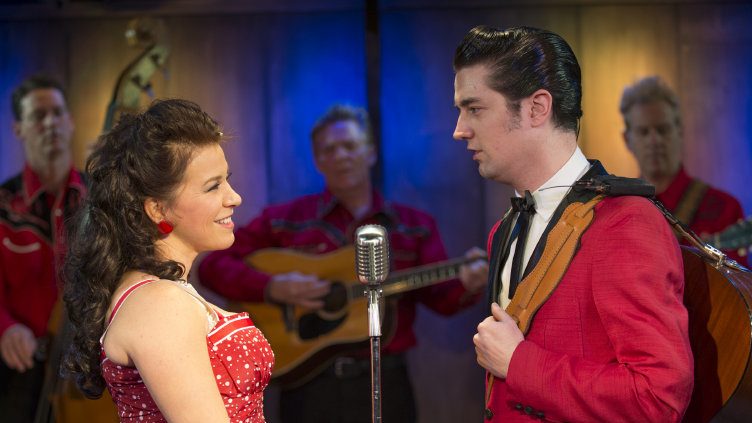 TRW’s RING OF FIRE: THE MUSIC OF JOHNNY CASH has had a remarkable journey from Broadway to theaters across the world. The show is getting a hot new re-conception by original RING OF FIRE creator Richard Maltby, Jr., at the Milwaukee Rep, now playing at the Stackner Cabaret, in the Patty & Jay Baker Theater Complex, through May 5th, 2013.

TRW’s Music & Materials team was in Milwaukee for the opening of the re-boot of the RING OF FIRE franchise. “Richard Maltby Jr. and the entire cast and crew of RING OF FIRE have truly created something special at Milwaukee Rep,” said one team member. “We know it is no easy task to create an intimate, five-piece version of a major musical (originally consisting of sixteen cast members and musicians) while still maintaining the integrity and heart of the show. What this production does, is it lets Johnny Cash’s music tell the story of his life,” he continued. “There is minimal dialogue, however, unlike a traditional review or concert, this production allows the audience to experience of the ups and downs of this legendary, yet deeply troubled artist, through his own vehicle of self-expression. The songs tell the story.”

Yes they do. From the opening chords of vintage Country to Rockabilly, Rock n’ Roll, searing ballads and gentle songs of love and deep faith, RING OF FIRE packs a score that provides a rich fabric in which to lay down the story of Johnny Cash. The great bio-pic Walk the Line told the story of the events of Cash’s life and the incredible struggles and triumphs of his life. RING OF FIRE gives the music the spotlight, as a core group of talented actor/musicians celebrate the songs that are such a part of our collective experience.

We guided the creative team to use the Milwaukee production to re-invigorate the show with a fresh look at the story-telling and orchestrations. Our team at TRW is extremely proud to have worked with Richard Maltby Jr. and Milwaukee Rep on the world premiere of this new RING OF FIRE.  Richard once again has created a spectacular evening of theatre surrounding the legend, lore and the man, Johnny Cash. “This new version is perfectly suited for the thousands of smaller theatres throughout North America and the world as Johnny’s music lives on and is embraced by new generations of Americans.

OnMilwaukee.com’s Dave Begel gave the show a glowing review, with a lead that beautifully captures the essence of RING OF FIRE:  “Johnny Cash – “The Man in Black” – is clearly the seminal icon in the world of country music. But in “Ring of Fire” the musical that opened Sunday night at the Milwaukee Rep’s Stackner Cabaret, Cash proves he is so much more than that. What we see in this spectacular production is a huge slice of Americana, the country with warts and hopes and dreams and horrors and fears. The country that suffered but always somehow triumphed. That’s the Johnny Cash that was there opening night. We saw not the story of a singer and his wife and his backup band. We saw the story of America.” [Read the whole review at OnMilwaukee.com]

Click here to find out more about licensing YOUR production of RING OF FIRE!