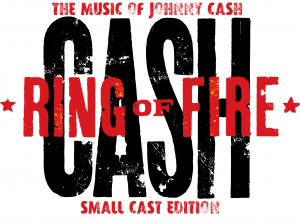 Theatrical Rights Worldwide (TRW) is proud to announce the release of the new RING OF FIRE SMALL CAST EDITION. RING OF FIRE has had a remarkable journey from Broadway to theaters across the world. Recently, the show received a new, re-defining production at the Milwaukee Rep by original ROF creator Richard Maltby, Jr. The new, streamlined song showcase features a cast of five actor/musicians. The remarkable story of Johnny Cash and his music is searing and arcs with an exhilarating concert experience that is unforgettable.

The five-piece version of RING OF FIRE is a more intimate edition of the original Broadway show. The five cast members can be the band as well, or theatre groups can put together a cast that fits their ensemble’s unique talents. TRW’s Music & Materials team was in Milwaukee for the opening of the re-boot of the RING OF FIRE franchise. “Richard Maltby Jr. and the entire cast and crew of RING OF FIRE have truly created something special at Milwaukee Rep,” said one team member. “We know it is no easy task to create an intimate, five-piece version of a major musical (originally consisting of sixteen cast members and musicians) while still maintaining the integrity and heart of the show. What this production does, is it lets Johnny Cash’s music tell the story of his life,” he continued. “There is minimal dialogue, however, unlike a traditional review or concert, this production allows the audience to experience of the ups and downs of this legendary, yet deeply troubled artist, through his own vehicle of self-expression. The songs tell the story.”

Following the Milwaukee Rep flagship production of the tight new tuner, the new RING OF FIRE SMALL CAST EDITION opened at the Haywood Arts Regional Theatre in Waynesville, NC, in another phenomenal staging that’s getting rave reviews. The reduced cast model is taking the show’s storytelling directly to the audience: “The cast includes five riveting singers/actors, each of whom play several characters in the progression from Cash’s birth in Arkansas to his many performances at The Grand Ole Opry,” writes Jim Kavener of the Asheville Citizen-Times. He praised the show as a vehicle for non-traditional musical theatre talent, “When it comes to capturing Cash in musical style, the most authentic performance is by young Matthew Curry, who is making his theater debut. This lad has charm and a warm and welcoming vocal instrument that would make Cash proud.”

From the opening chords of vintage Country to Rockabilly, Rock n’ Roll, searing ballads and gentle songs of love and deep faith, RING OF FIRE packs a score that provides a rich fabric in which to lay down the story of Johnny Cash. The great bio-pic “Walk the Line” told the story of the events of Cash’s life and the incredible struggles and triumphs of his life. RING OF FIRE gives the music the spotlight, as a core group of talented actor/musicians celebrate the songs that are such a part of our collective experience.

TRW’s President and CEO Steve Spiegel said in a recent interview, “This new version is perfectly suited for the thousands of smaller theatres throughout North America and the world as Johnny’s music lives on and is embraced by new generations of Americans.”

Click Here for more information on licensing RING OF FIRE: THE MUSIC OF JOHNNY CASH – SMALL CAST EDITION.
have a glance at this page