SATURDAY NIGHT FEVER is now available from TRW in a new edition that makes this iconic musical a good match for high school and youth theatre programs. Capturing the historic flavor of disco-mania in New York City, this energetic musical features Bee Gees hits including “Stayin’ Alive,” “If I Can’t Have You,” “How Deep is Your Love,” “Boogie Shoes,” and “Disco Inferno.” This is the story of a talented, streetwise kid from Brooklyn who attempts to escape his dead-end life through dancing. Told through the eyes of a female DJ, SATURDAY NIGHT FEVER, New School Edition explores relationships on and off the dance floor with humor, conflict, style and unforgettable swagger. 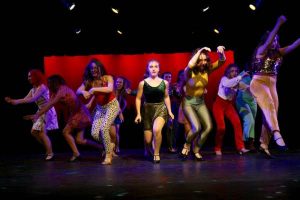 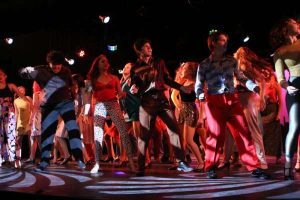 SATURDAY NIGHT FEVER School Edition is now available for licensing throughout the USA and Canada!

The show begins in the present in your Theatre. A female DJ, Frankie M. is setting up on stage. Props/costumes and small set pieces can be seen on the periphery of the stage. As the music begins, a large group of players enthusiastically enters to sing and dance to “Stayin’ Alive.” After the opening, Frankie M. introduces the players who take us back to 1979 to tell the story of Tony Manero and Stephanie Mangano.

Tony Manero is a clerk in a paint store in Bay Ridge, Brooklyn. But he lives for Saturday night and his visit to the local disco, 2001 Odyssey. At the disco Tony is no longer an inconspicuous employee, he is the king of the dance floor. There he meets dancer, Stephanie Mangano. The two decide to take part in a dance competition. Although Tony is interested in a relationship with Stephanie, she rejects him, thinking that she can pursue higher goals and meet a better selection of men in Manhattan. Tony and Stephanie continue to rehearse and win the dance competition. However, Tony, not happy because a competing pair of Latino dancers was clearly better, hands the championship trophy to them. The dispute divides Tony and Stephanie. After some very tragic events, Tony and Stephanie decide to remain friends.

Most of the songs from the original Paramount film soundtrack are included in the stage musical. The album remained 24 weeks on the top of the U.S. album charts and stayed until March 1980 on the charts. In the UK, the album also achieved first place for 18 weeks and it is one of the most successful film soundtracks of all time. In 1979 it won a Grammy as Album of the Year. In 2003 it reached # 131 of Rolling Stone’s “500 best albums of all time”.

How Deep Is Your Love

More Than A Woman

You Should Be Dancing

If I Can’t Have You

Music and Lyrics by Barry Gibb and Albhy Galuten

What Kind of Fool

Music and Lyrics by Harry Casey and Richard Finch

Music and Lyrics by Leroy Green and Tyrone Kersey