Why did you choose STRIKING 12?
STRIKING 12 is one of those little known gems of a musical, created by a band called GrooveLily, and later transformed into the “book musical” that we are presenting. The show is a wonderful blend of musical styles – rock, pop, folk, musical theatre – that combine to put a modern twist on a story as old as, well, Dickens and A Christmas Carol.

What’s the story?
The central character, The Man Who’s Had Enough, is at the end of the year and the end of his rope. Nothing seems to make him feel better about himself and everything around him until he meets, quite by accident, a girl selling “full spectrum holiday light bulbs” as a way to overcome the holiday season blues. Before he knows it, The Man is on a journey in which he explores Hans Christian Andersen’s The Little Match Girl and comes to learn just what is really important in life – love, family and good friends.

Do you have a favorite song from the show? What is it?
My favorite song is “It’s Not All Right,” which comes toward the end of the show. It is sung by The Man and is his epiphany moment, where he realizes that his sour attitude and contempt for all that goes on during the holidays just won’t do any more. As he thinks about The Little Match Girl and the woman selling the full spectrum holiday light bulbs, he realizes he has to get out of his chair and go make the world a better place, at least for one person.

Our theatre has such a unique ability to transform for each show. Any clues as to how you’ll use the stage for STRIKING 12?
While we will perform STRIKING 12 on what we call the “Mainstage,” the seats will be arranged to create a sense of intimacy, as the audience will be wrapped around half of the performance space. We hope this will make the connection between the performers and the audience something very special, in keeping with the warmth and holiday spirit of the show. We’ll only have space for 150 seats per show, so get your tickets early! 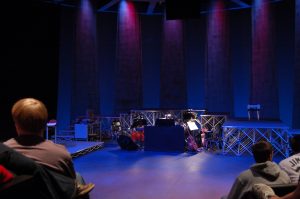 What do you think is the most valuable thing our students will take away from working on and appearing in STRIKING 12?
Because we have such an active musical theatre program, we are always trying to introduce our students to new material, as well as more traditional shows. So, in addition to working on a musical that has yet to be performed widely, the students will also get to be a part of something that addresses issues of redemption, hope, and grace, all important parts of any holiday celebration.

Any final thoughts?
STRIKING 12 is the perfect way to kick off your holiday season. I hope you’ll come celebrate that most wondrous time of the year with us and leave the theatre feeling joyous and hopeful for the season ahead. 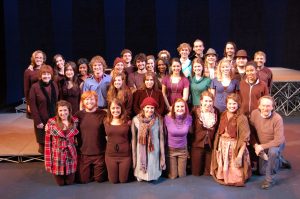 Check out TRW’s showpage for STRIKING 12!