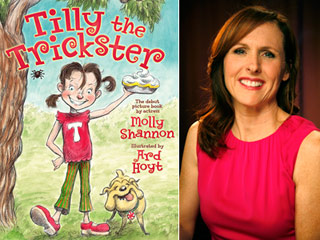 Theatrical Rights Worldwide (TRW) is the home to a brilliant collection of Theatre for Young Audiences (TYA) musicals including, HOW I BECAME A PIRATE, PINKALICIOUS THE MUSICAL, NO DOGS ALLOWED!, AWESOME ALLIE: FIRST KID ASTRONAUT, STINKYKIDS THE MUSICAL,WANDA’S WORLD, HOLDING THE TORCH FOR LIBERTY, NORA’S ARK, ANNE OF GREEN GABLES, SLEEPY HOLLOW: A MUSICAL TALE, and THE TRUMPET OF THE SWAN. 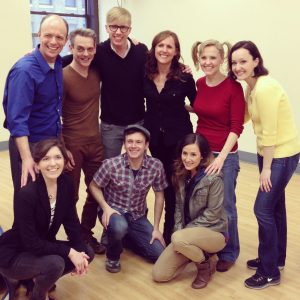 Molly Shannon and the Cast of TILLY THE TRICKSTER at Pearl Studios in NYC, March 1st, 2013

The tale has a title character who, in author Shannon’s words, “is an imperfectly perfect role model,” who likes to play tricks. The story reminds us to “embrace the silliness and fun of life,” says Shannon. The author has certainly embraced the silliness and fun in life through her brilliant comedy on Saturday Night Live and feature films, creating unforgettable characters like Mary Katherine Gallagher (Superstar!).

Shannon attended the reading and was elated. Her post-show glow as she met with the cast and crew after the hilarious, tender and musically magnificent presentation was infectious and the room was humming with the buzz that accompanies a new work that is firing on all cylinders.

“TRW is thrilled to be developing this high-spirited and fun story from the page to the musical stage along with offering resources and support for the reading. It will be a treasured addition to the TRW catalog of exciting new shows for family audiences” said TRW President & CEO Steve Spiegel. TRW is an industry-leading New York City based licensing house handling contemporary Broadway titles including MONTY PYTHON’S SPAMALOT, MEMPHIS, THE COLOR PURPLE, and THE ADDAMS FAMILY.

TRW’s commitment to developing TYA titles is evidenced by our growing catalog of musicals created especially for a small group of adults to perform for kids and their families. These shows are designed to take existing stories for young people and make them accessible in a musical theatre setting. Gathering just the right writers and creative team is the top priority in this process.

Stay-tuned for the announcement of the release of TILLY THE TRICKSTER from TRW!