As the Marketing Associate, one of my first assignments was to write for this very blog. I was asked to write about one of our newest musicals: THE MAN IN THE CEILING. The fear of failure paralyzed me. Doubt started creeping into my head: “Can I do this?” “Where do I begin?” I felt anxious and scared about producing something worthy of placement on our blog. “What if I failed?” The answer to that became clearer as I got closer to the story and the music.

I began researching THE MAN IN THE CEILING’s creators: Andrew Lippa (Music & Lyrics) and Jules Feiffer (Book). I needed to know who they were and what motivated them to write this particular musical together . An article I came across written by Lippa, titled “7 Pieces of Advice for Writers,” addressed overcoming fear and trusting your art. “Let the piece become what it wants to be…be ready to tell this story in a new way.” These were the words I needed to hear at that moment. My own fears of failure diminished as I absorbed his advice. My confidence grew as I realized I should not worry about the outcome and just write.

As I continued reading about Andrew Lippa and his work, I discovered his inspiration for composing the music and lyrics for THE MAN IN THE CEILING fit the criteria he uses for everything he works on: “Loving the characters and feeling moved.” A project that I initially feared soon became one I felt passionate about. I could not wait to read the book and fall in love with the characters.

The Man in the Ceiling, written by Jules Feiffer, is a story about a boy named Jimmy who loves to draw, and cartooning is his specialty. As a 7th grader in middle school Jimmy is young and vulnerable; He’s trying to fit in. He struggles with doing what he wants to do versus what his father and the popular kid in school thinks he should do. Jimmy’s Uncle Lester understands Jimmy’s artistic side and encourages him. Both Jimmy and his Uncle are trying to achieve acceptance and appreciation of their talents. Their bond is what enables them both to succeed in the end.

While reading the book, I compared scenarios and situations from my own family to Jimmy’s. No family is perfect or without conflict. The Man in the Ceiling portrays this in a beautiful, uplifting way.

People, photographs, and music captivate me through the stories they tell; they make my heart sing. Andrew Lippa was inspired to write the musical adaptation after receiving a copy of The Man in the Ceiling as a gift. He then gifted it to Broadway producer & director, Jeffrey Seller who then signed on to direct the initial productions. Sharing a book was the catalyst behind this musical bringing three brilliant creators together.

The story of its transformation from page to stage, coupled with my love for it, moved me immensely. Within days I was gifting the book too. I couldn’t wait to share it and see if others felt connected and inspired the way I did. 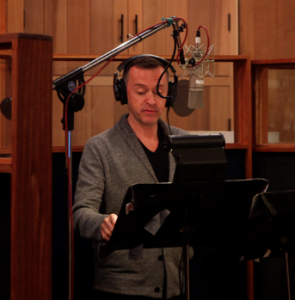 Andrew Lippa in the recording studio

Jules Feiffer’s charming novel consumed my thoughts for days. How would this story about passion and patience, fear and failure, hope and happiness sound in a musical story? Music tells its own story evoking all sorts of emotions and I was counting the days until I could HEAR this story told by its brilliant composer.

Listening to the cast recording for the first time was magical. I found myself imagining these songs accompanying me on my next 5K race. An injury that derailed me from my perpetual half marathon streak would no longer stop me. The music filled me with inspiration and excitement where fear was lingering too long.

Playlists with carefully chosen titles have always been the power behind crossing the finish line for me. Music is magic. Magically it would erase my fear and fuel my run. I stopped thinking about my previous injury and started listening to “Jimmy.” This upbeat song with the bouncy, piano feel filled me with happiness, joy and courage. I listened to it repeatedly and became obsessed with this new soundtrack.

“Draw Your Own Conclusion” is both Act II finale and the inspirational message surfacing in the script. As I ran, the powerful lyrics from the refrain provided me with the positive energy I needed to run:

Wrap yourself in possible

And watch your life take shape

Chart your own direction

Choose what’s right for you

Draw your own conclusion

And all your dreams come true

THE MAN IN THE CEILING has left its mark on me in many ways. It has filled me with joy and inspired me to express my enthusiasm for the messages in both the story and the music: Pursuing your passion and following your dreams. Jules Feiffer writes that “every ‘failure’ is a piece of future luck.” This, along with Andrew Lippa’s lyrics for “Draw Your Own Conclusion,” are perfect mantras for anyone to include in their life.

In both the book and the musical, Jimmy is drawn to create because “The Man in the Ceiling” tells him to. We are left to wonder, “Who is he anyway?” I think he is whoever you want him to be or whoever you need him to be. You draw your own conclusion. I drew mine. 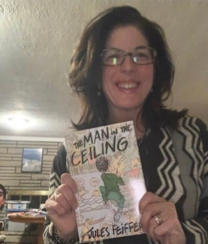 If you haven’t read MAN IN THE CEILING yet, I can’t recommend it highly enough!

Listen to THE MAN IN THE CEILING now!