12 year-old Jimmy Jibbett would rather be a successful cartoonist than be in 7th grade. His father disapproves. His mother is busy. His uncle tries to understand but is too wrapped up trying to write a love song for his next flop musical. Where can Jimmy turn for inspiration and hope? Maybe THE MAN IN THE CEILING can lead him to his true destiny…If only Jimmy would look up!

A collaboration between Jules Feiffer, the Pulitzer-Prize-winning cartoonist and celebrated author, and Tony-nominated composer-lyricist Andrew Lippa, THE MAN IN THE CEILING is an uplifting tale about following your creative passion against all odds. 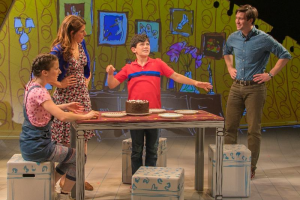 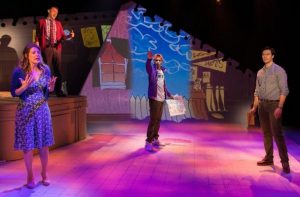 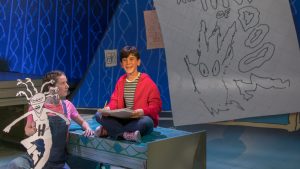 Download or stream the album today, courtesy of Ghostlight Records!

“The high points of this show are musical, with Mr. Lippa providing a sublime Act I duet, “Disappear.” – The New York Times

“This collaboration between writer Mr. Feiffer and composer Andrew Lippa bounces along with high-voltage energy to its exuberant end.” – 27 East

“The Man in the Ceiling is a show that will stir emotions, make you laugh and in the end leave you gleeful.” – Hamptons.com

Jimmy Jibbett is 11. He lives with his mother, father, and sister in Suburban Long Island. There’s nothing all that spectacular about his life but for one thing: Jimmy draws comic. In the Amazon jungle of Jimmy’s imagination, Jimmy’s characters are in peril (“Doin’ Fine”). In the climactic moment of the song we hear Jimmy’s Father calling out “Jimmy!” Reality intrudes.

The jungle disappears and Father is asking about Jimmy’s delinquent homework and family chores. Charley Bemmer, the slightly older athletic boy from next door, appears and Father and Charley throw a baseball around. This joyful athletic moment reminds Father what Jimmy is not, in addition to reminding Father of his own inadequacies (“Almost There”).

Uncle Lester – Mother’s brother – is a struggling songwriter only moments away from his first big hit. Father calls Lester “Mr. Floperoo.” Lester is currently struggling to write the perfect love song for his newest musical. Jimmy, doing chores, ponders, along with Uncle Lester and, eventually, Father, what life could be like with a big hit show (Lester’s wish) or with Father’s attention on comics (Jimmy’s wish) or with an athletic boy (Father’s wish). They begin a song (“Jimmy”) that also introduces Mother and Lisi (Jimmy’s aggressive-but-loving older sister).

At dinner, Father belittles Uncle Lester while Jimmy tries in vain to impress Father with his new comic book. Lisi speaks dismissively about Charley Beemer as Mother distractedly serves dinner while answering a series of calls and texts. Dinner concludes and Jimmy goes to meet up with Charley Beemer.

Outside, Charley Beemer is going through Jimmy’s newest comic creation showing little enthusiasm. Suddenly, Charley Beemer has his own idea: The Hand of Doom! An evil hand that flies around doing dastardly deeds. This is not really Jimmy’s thing but Charley Beemer, the most popular boy in school, won’t be denied: Jimmy must write and draw Charley’s ideas and agree to have new pages tomorrow. Jimmy agrees. Alone, Jimmy admits his greatest weakness as an artist: He can’t draw hands (“Hands”). Jimmy calls on imaginary assistants to help him draw all the hands he would ever need.

Back at home, Mother and Father keep failing to connect. Mother’s world – interior design – is ordered and, to her, completely understandable. Her husband? Less so. Father’s world is similarly confused. They sing (“Disappear”) as they wonder, separately, if their marriage will disappear because of the troubles they currently face.

Jimmy’s cartoon creations are growing impatient with him. Why is he drawing Charley Beemer’s ideas when Jimmy should be drawing and writing his own ideas? His characters spring into action: Each one tries to convince Jimmy to (“Draw Me”) rather than those nonsense Charley Beemer ideas.

Charley Beemer is not impressed with Jimmy’s progress on “The Hand of Doom” comic. In fact, he’s downright disappointed. Dismissive, inflated and altogether bossy, Charley decides to give Jimmy one more chance and exits. Jimmy wants to impress his hero and, more, wants to earn his friendship (“Maybe He Likes Me”).

Jimmy, at his most vulnerable, is visited by The Man In The Ceiling. Jimmy talks to him, trying to understand why he’s come to visit. Quickly, however, Jimmy ends the conversation: “Could you maybe come back later?” And Jimmy gets his wish. The Man In The Ceiling fades away revealing Uncle Lester at his piano.

Uncle Lester is near panic. He hasn’t written his love song. (“Where is My Love Song”). He comes downstairs to share a brilliant new idea with the kids as we turn to Father, reading Jimmy’s recent report card. Jimmy’s grades are bad, and worst of all, he got an F in history. As the song continues, Father angrily sings about how it’s time to set firmer boundaries. In a private moment, Mother adds to this, sharing her thoughts while Charley Beemer sings with assurances to Jimmy that his ideas will yield results. Finally, Jimmy’s cartoon characters beg Jimmy not to give them up in favor of Charley’s Beemer’s ideas. The full company reaches a musical climax as Father bursts into Jimmy’s room, report card in hand, quietly demanding “No more comics.” Jimmy accepts this verdict, but for everyone else it shakes their entire world as they all respond, desperately, “No more comics!”

Hiding under his bed, Jimmy commits to quitting. He crawls out with a big, green garbage bag. Yes. Jimmy wants to throw all his comic book characters out. He’s no longer (“Kidding Around”). No more comics. The comic characters are understandably terrified. However, as Jimmy’s creations, they obey.

Father, seeing Jimmy with the garbage bag, is touched and lovingly reminds Jimmy that he’s growing up. Father exits as Jimmy realizes he’s now got to deal with Charley Beemer and tell him the truth. Jimmy disappears as Mother stands, staring at the green garbage bag. Mother can’t contain her dismay as she asks Father to consider who is (“Like Your Son”)? She concludes that Father is the real disappointment of the family, not Jimmy. Not Lester. Father is stunned.

Jimmy’s cartoon characters cry out from the garbage bag, one last time, for their very existence, as Lisi drags Jimmy into Uncle Lester’s studio. Lisi reveals everything to Uncle Lester. She unwittingly insults Uncle Lester as she asks him how he can endure, in the face of all the evidence that, well, he’s not really any good. Uncle Lester considers this question seriously and answers (“I Do What I Do”). Lester believes it doesn’t matter what “they” say about my art: I make it because I love it. And, to prove it, he has unlocked his truest and greatest creation yet: He has written his love song.

Lester begins his love song, which is indeed true, deep, and reflective of Mother and Father’s relationship in real life (“You Are the Friend”). The song is like a magical wind spreading through the house, taken up by Mother and Father and the entire family as we transition from the house to the backers’ audition of Lester’s new musical. It is as if the entire family – Father now included – has taken up Lester’s voice.

Back at home, as they wait for Lester’s arrival, the family celebrates. Jimmy begins by praising the Inca gods that surely must have had something to do with Lester’s success. Father, with glee, insists they should be nodding instead to the god of Broadway musicals (“To the Gods”). Father also now thinks Lester is a genius! The moment becomes a raucous, old-fashioned Broadway-styled celebration. They finish just as Uncle Lester returns home. Lester stands silently, his face growing strained and ashen, a tear rolling down his face. It’s clear, Lester has flopped again.

Jimmy runs out of the room, screaming “No, no, no, no, no!!” Straight to his bedroom he pulls out paper and pens. He’s drawing!! His comic characters, who he failed to actually throw out, start to appear and watch him draw. Who is he drawing? Jimmy is drawing The Man in the Ceiling who, as they talk, gives Jimmy the strength to do what happens next. And what happens next? Jimmy tells Charley Beemer “No”. No, Jimmy will not draw Charley’s ideas. Charley Beemer warns Jimmy there’s a cost: Charley’s friendship. Jimmy, more sure than ever, simply says “No.”

Next morning, at the breakfast table, Uncle Lester peruses the “Want-Ads” in the newspaper. The kids, and even Father, try to discourage Lester from giving up songwriting, but Lester is convinced Father was right: Lester is (“Mr. Floperoo”). Jimmy interrupts Uncle Lester by thrusting a drawing in front of him. It stops Uncle Lester cold.

It turns out, Uncle Lester’s advice – do what you do – was heeded by Jimmy. Jimmy drew a simple and elegant drawing of a hand. This epic task of every artist – the ability to draw a human hand – has been conquered by this boy, with some serious help from Uncle Lester and The Man in the Ceiling.

The family is stunned. Most of all, Father who, finally getting it, starts (“Draw Your Own Conclusion”). Father learned from Jimmy. Now, it’s Uncle Lester’s turn who, inspired, finds himself revived and recommitted to making art. Jimmy has encouraged them all. As they all sing the final chorus of the song, a projection of that beautiful hand is shown high above – proof that Jimmy has indeed solved his own dilemma and, in doing so, brought his family closer together.

1 female, 2 male, 2 boy and 1 girl featured roles
Jimmy Jibbett, 12 (unchanged voice): Boy cartoonist
Father: 30’s-40’s: Jimmy’s “trying-to-understand-it-all-but-lost-in-his-old-habits” dad.
Mother: 30’s-40’s: Jimmy’s interior designer of a mother who is often on the phone, texting or rushing to the next whatever, but not really “there”.
Uncle Lester: 40’s-50’s: Jimmy’s songwriter of an uncle who can’t pay the rent and, therefore, lives with the family.  He’s Mother’s brother and Father thinks he’s a floperoo.
Lisi: 15-18: Jimmy’s bossy, loud, bossy, in your face, bossy sister. But she really loves Jimmy’s comics.
Charley Beemer: 15-18: The athletic boy next door who Jimmy wants to befriend and impress and who Father wishes Jimmy was more like.