Yesterday Allie was just a normal kid, but today she’s headed into outer space! With the help of her trusty talking dog Captain Chaos and Rover the Dancing Robot from Mars, Allie’s on a mission across the solar system to save Earth, and maybe learn some things about science along the way. But she’d better be home in time for dinner! Grab your space suit and get ready for an adventure that’s out of this world!

Watch the promo video for the US National tour of AWESOME ALLIE: FIRST KID ASTRONAUT

Check out the tour’s website and book it at your venue today! 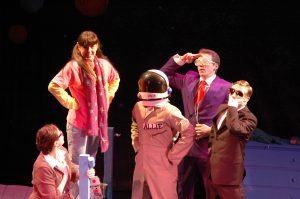 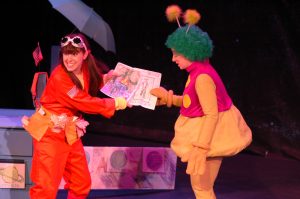 Allie was just your typical eight year old girl from Skokie, Illinois, until one day she was chosen for a very special mission. At the farthest edges of our solar system, a space alien lands on Pluto looking for something very important from Earth. But it won’t speak with the President. It claims it won’t speak with anyone. Anyone, that is, except Awesome Allie. Called from across the sky and tapped by the President himself, Allie soon sets out in her dance-powered spaceship on a journey through the stars, soaring from Earth to Pluto with only a trusty, talking dog named Captain Chaos by her side. Along the way, she’ll meet unlikely challenges and unlikelier friends, from the disco dancing land rover stranded on Mars, to the world’s smartest supercomputer, PAL 9000. She’ll learn the order of the planets and lots of fun facts about the solar system, and she’ll need the whole audience’s help if she’s going to dance her ship all the way to Pluto. But what does this Alien want? What is it that’s worth crossing the entire solar system to find? Allie’s about to discover that friendship just might be the most important thing in the whole universe—but only the audience can help her figure it out!

ALLIE (F) – An energetic eight year-old go-getter, she loves outer space and is looking for a best friend

ALIEN (F; Doubles as PAL) – A cute and friendly extra-terrestrial who has crash landed on Pluto with a mysterious secret

ROVER (M) – A land rover sent by the Russians to explore Mars in 1971, he loves disco dancing and is looking for a way home

OTHERS – All doubled roles may be played by different actors. Added chorus optional.