From New York to Paris, from ragtime to jazz:  THE HELLO GIRLS chronicles the story of America’s first women soldiers in this new musical inspired by history.  These intrepid heroines served as bilingual telephone operators on the front lines, helping turn the tide of World War I.  They then returned home to fight a decades-long battle for equality and recognition, paving the way for future generations.  THE HELLO GIRLS was commissioned and premiered by NYC’s Prospect Theater Company to celebrate the centennial of these groundbreaking women. 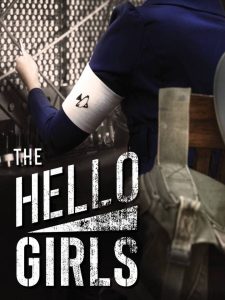 “The Hello Girls is a refreshing and rewarding musical that sheds light on these unknown women. It’s both a patriotic musical and a lesson in feminism as it honors the first women soldiers in the U.S. Army. It’s also a rich, rousing and enjoyable piece of theater and an eye-opening history lesson.” – Gil Benbrook, Talkin’ Broadway, Jan 12, 2022

Enjoy a preview from Prospect Theater Company’s World Premiere of THE HELLO GIRLS:

Listen to the Original Off-Broadway Cast Recording of THE HELLO GIRLS on Spotify!

Reviews of the World Premiere of THE HELLO GIRLS:

“Filled with memorable songs and brilliant performances, it is a musical as triumphant as the true story on which it is based…Mills (who wrote the music and lyrics) has filled this action-packed war story with instant-classic songs…a particularly joyous experience. You won’t want to say goodbye.” – Theatermania

“one of the best new musicals I’ve seen Off-Broadway…a consummate ensemble piece…The Hello Girls is a winner on all fronts” – BlogCritics.org

“The musical numbers are catchy, and the lyrics are bright and intelligent…winning performances” – Wolf Entertainment Guide

The protagonist of THE HELLO GIRLS is Grace Banker, chief of the first female telephone operators’ unit of the US Army Signal Corps. The unit was set up in 1917 on the orders of General Pershing, who wanted skilled telephone operators to ensure effective communication between the American Expeditionary Forces in Europe. Of course, the best operators at that time were women, so that’s who Pershing set out to recruit.

In order to coordinate with Ferdinand Foch’s army, the operators also need to be fluent in French, making Franco-American Louise LeBreton  a shoo-in. Idaho farm girl Helen Hill has been speaking French with her maman since she could crawl. Bertha Hunt isn’t content to sit at home while her husband ships off, so she joins the army too. Suzanne Prevot sees enlistment as an opportunity for adventure. She convinces Grace to join her, arguing, “Girls like us – we aren’t cut out for tending Victory Gardens.” Of course, Grace will have to cultivate her professional relationship with her immediate superior, Lt. Joseph Riser, a man’s man who is none too thrilled about leading a company of ladies.

Music and Lyrics by PETER MILLS

You also agree to clear and prominent credit to the originating theatre on the title page of all programs for subsequent productions of the Play on and all publications of the Play, substantially as follows in size type no less than 10 point:

Grace Banker: Articulate and poised, with a core of steely strength that makes itself apparent as she grows into her role as leader.

Louise Lebreton: 18. Fearless, flirty, headstrong and often insubordinate. Born in France, she has family fighting with the French army.

Cpt. Joseph Riser: The Signal Corps officer who recruits and trains the women. A career army man, a stickler for rules and order, he is skeptical of the women’s presence in the army.

Lt. Ernest Wessen: Head of the recruiting center for the Signal Corps

Gen. John Pershing: Commander of the American Expeditionary Forces. Hard, relentless, inflexible, with a deep sense of honor and American individualism and identity.

*with the exception of Capt. Riser and Gen. Pershing, the men all play a variety of supporting roles

The original off-Broadway production of THE HELLO GIRLS utilized a cast of actors who also played instruments. While the standard licensing version of THE HELLO GIRLS is written with a completely separate pit orchestra, directors are welcome to incorporate actor-musicians at their own discretion based on the abilities of their cast. (If you are interested in receiving materials that replicate the exact instrument/actor combinations of the original off-Broadway production, please reach out to your TRW licensing representative.)

*Accordion and bells may be substituted by keyboard patches.