Sail off on a fantastic musical excursion when a band of comical pirates lands at North Beach looking for an expert digger to join their crew. Braid Beard and his mates enlist young Jeremy Jacob as they look for the perfect spot to bury their treasure. Jeremy finds that adventuring can be lots of fun, but also learns that love and home are treasures you can’t find on any map! The whole family will love this delightful and swashbuckling musical adventure. 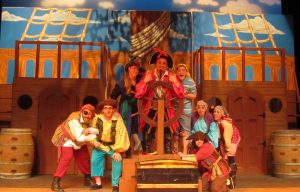 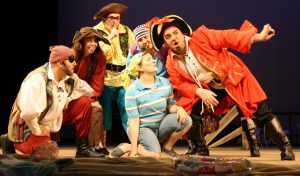 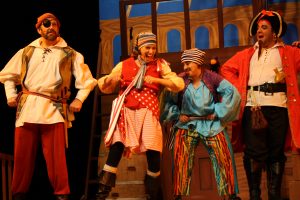 Young Jeremy Jacob is digging in the sand at North Beach when he is greeted by Captain Braid Beard and his mates, and is recruited to help find the perfect digging spot for their treasure. Boarding the ship, the Captain introduces the boy to his pirate crew who share with him the ins and outs of a pirate’s life at sea. Jeremy is instructed on how to talk like a pirate and schooled in pirate manners and etiquette (or the lack thereof). In turn, Jeremy shares with them what a typical kid’s day is like and the wondrous game of soccer! The pirate world proves to have many surprises for Jeremy Jacob, not the least of which is when the fearsome pirate Sharktooth admits to him that he is really just a sensitive guy! When a storm arises, the skills of the crew are called upon to steer the ship to safety and Jeremy Jacob begins to wonder if the pirate life is really for him. But all is well and they arrive back at the beach in time for soccer practice – but not before they survey the area, following the map that Jeremy has drawn for them, leading them to the perfect spot to bury the treasure – his own backyard! They reminisce that it’s always good to go home and Jeremy realizes that the simple things in life, like a kiss and a warm tucking in at night, are among those that are most important. Parting is bittersweet, but before leaving,  the pirates assure Jeremy that they will be back if he ever needs them. He only has to fly the Jolly Roger, or he can simply find them at pirates-dot-aarrgh! A story of adventure and finding one’s own heart – a path that can’t be found on any treasure map!

HOW I BECAME A PIRATE

Performed by arrangement with Houghton Mifflin Harcourt and The Sandra Dijkstra Literary Agency. HOW I BECAME A PIRATE received its world premiere at First Stage Children’s Theatre, Milwaukee, WI.

MAX THE PIRATE – he wears a stuffed Parrot on his shoulder – “he’s only a stuffed, plush Parrot but we don’t have the heart to tell ‘im ‘ees not real”

AUTHOR’S NOTE: The OFFSTAGE VOICES of Jeremy’s MOM and DAD may be performed by two of the Pirates, by stage crew, or be pre-recorded. If desired, MOM and DAD could appear onstage in the first scene. If so, doubling should be determined by the Director. However, MOM and DAD should not appear onstage in the final scene. Additional Pirates (male or female) can be added depending upon budget and production needs. The Director may choose to assign character names to these additional Pirates – and have BRAID BEARD introduce them along with the other PIRATES in Scene 2 during the song “A Good One to Boot.” Director may also simply add PIRATES without assigning names. To reduce the cast size to seven, you may eliminate the character SCURVY DOG and reassign lines to other PIRATES. To reduce the cast size to six, you may eliminate the character of SCURVY DOG and SEYMOUR BRAUNSCHWAGGER and reassign lines to other PIRATES. Director may choose to cast male or female PIRATES if appropriate to the character – with the exception of BRAID BEARD, JEREMY JACOB, and SHARKTOOTH who should be male.