Snow White prepares for her birthday ball and dreams of finding her prince charming. When the star-crossed couple meets it’s love at first sight, but the vain and evil Queen – who fears the princess’ beauty – will stop at nothing to be the fairest of the land. With the help of a trusted friend, Snow White is forced to flee into the forest. This romantic and funny adventure has all your beloved characters and a few more beside: the raven-haired and resourceful Snow White, the very charming Prince Philippe, his kind and shrewd butler Rupert, the evil and devious Queen, a witty and slightly beleaguered Magical Mirror – and of course, there are the Dwarves – need we say more? A clever retelling of a classic tale – one for children and adults alike! 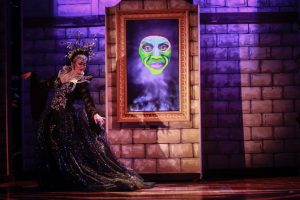 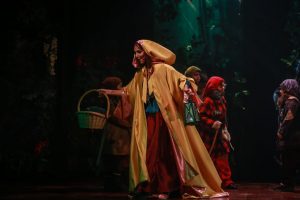 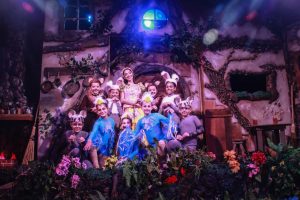 Listen to the composers’ recording of SNOW WHITE AND THE PRINCE

After a rousing overture, we find the Evil Queen in her chambers asking the Magic Mirror “Who’s the Fairest One of All?” the Mirror answers truthfully “You, my Queen, for none could be – more beautiful than thee!” But is she, really? At bedtime, Snow White and her Nursemaid are excitedly talking about Snow White’s birthday ball which will take place the next day. Snow White admits she is nervous and afraid to dance, but is reassured that anything can happen – and Snow White muses she may find her dreams coming true with Just One Dance. At the Ball, all of Snow White’s fears are forgotten when she meets the charming Prince Philippe who teaches her how to dance the Waltz and they both immediately fall in love! But when the Evil Queen makes her grand entrance, she sends Snow White to bed and quickly turns Snow White’s birthday ball into her own party. Meanwhile up in the Queen’s chambers, the Mirror ponders what life might be like living somewhere else – but then admits with remorse: “No – I Got the Queen.” After the ball, the Queen stops by the Mirror for a little vanity boost, but upon hearing the Queen’s request of “Who’s the fairest?” the Mirror truthfully replies “Snow White is now more beautiful than you!” Enraged, the Evil Queen decides to send Snow White to the dungeon in the morning. Overhearing the Evil Queen’s plan, the Nursemaid quickly tells Snow White that she must flee the Castle immediately and hide in the forest. A frightened Snow White is encouraged by her loving nursemaid to hurry On Your Way – and who knows what great things adventures she may find!

At home, Prince Philippe cannot sleep – he is so struck with love for Snow White. Rupert, his friend and valet, encourages him to get some sleep and that he can see her in the morning. Reluctantly, the Prince falls asleep thinking about his Waltz with Snow – the Waltz Reprise – to which Rupert comments “Ah, love! Very good, sir!” First thing in the morning, the Evil Queen goes to Snow White’s bedchamber only to find her missing and summons her guards to find her immediately. But Snow White is far off in the woods where she meets the seven “dwarves” who declare “people call us dwarves but we would like to recommend that you don’t put a label on us – just call us friends!” She is immediately taken with her new, happy, singing and rhyming friends – but the wily dwarves sense danger and invite Snow White to stay with them. At the Palace, the Prince and Rupert stop by to see Snow White and her reluctant Nursemaid admits to them that she has fled into the forest – and the Prince declares that he will go after her to protect her. The Queen, however, conjures up a new plan to subdue Snow White and once again become the Fairest One of All – and she and the Mirror also venture into the forest.

At the Dwarves house, all is well and Snow White has been enjoying cooking, baking, and making lunches for the Dwarves – just doing Every Little Thing for them. When they leave for their work, the Evil Queen, disguised as a old hag, arrives at the Dwarves’ house brining treats and, in particular, a candy apple with hazelnut topping – Snow White’s favorite! The hag tempts Snow with the apple urging her to take Just One Bite. Wandering lost through the forest, the Prince and Rupert are suddenly surrounded by the Dwarves who think they have come to harm Snow White. They engage in a Forest Rumble and the clever Dwarves are victorious. But soon they explain that they have come to save Snow White and the Dwarves lead them to her. Back at the house, Snow White cannot resist taking a bite of the candy apple and falls to the floor in a deep sleep as the Evil Queen rejoices to be the fairest once gain. When the Prince, Rupert and the Dwarves arrive, they are heartbroken when they find Snow White deep in the spell. They all mourn her – but Rupert reminds the Prince that he had once said that love could conquer all evil. The Prince kisses Snow White and she awakes – and together they pledge that their Love Can Never Die.

Once all has been restored, the Prince, Snow White and the mighty Dwarves head to the palace determined to once-and-for-all put a stop to the Queen. At the palace the Evil Queen engages them all in a Confrontation and – though the Dwarves have subdued the guards, and the Prince valiantly takes a stand, the Queen begins to conjure up a spell that will turn Snow White and the Prince both into stone forever. As she casts the evil spell, the Mirror boldly jumps in front of the Snow White and the Prince – and the spell is reflected in the mirror and reversed back to the Queen – who, herself, is turned to stone! All is well – the Prince and Snow White are together, the Dwarves come to live in the Prince’s Palace, Rupert and the Nursemaid find love, the statue of the Queen is placed in the garden as a planter, and the Mirror proclaims in the Waltz Finale that all will now live “Happily ever after!”

SNOW WHITE AND THE PRINCE

Book, Music and Lyrics by

SNOW WHITE: A beautiful Princess – the target of the Evil Queen’s envy

PRINCE PHILIPPE: A dashing, charming Prince – a bit of a romantic –who falls for Snow White at first sight

EVIL QUEEN: Beautiful but evil through and through – totally caught up in her OWN vanity – can’t stop asking the Mirror for compliments

MAGIC MIRROR: The Evil Queen’s full-length “vanity” mirror who talks and walks. He hates being with the Queen and constantly answering her questions about her beauty. He is sarcastic and pushes the Queen to the edge, hoping to someday be in better company

SNOW WHITE’S NURSEMAID: A kindly woman who loves Snow White and will do anything to keep her safe

RUPERT / ENSEMBLE 1: Rupert is the Prince’s witty and faithful butler, valet, and friend

THE SEVEN DWARVES / ENSEMBLE: They are comical – they speak in rhymes – they come in various sizes and shapes they can be male or female – adults or children – and they may double the roles below as noted GUARD 1 / ROYAL SECRETARY GUARD 2 / ROYAL SERVANT

ADDITIONAL GUARDS, SERVANTS AND ENSEMBLE MAY BE ADDED IF YOU WISH TO EXPAND THE CAST