NEWSical THE MUSICAL, the Off Broadway smash-hit revue, is now available for licensing for theatre groups everywhere. A series of songs, sketches and scenes about the news, performed like a live newscast, this hilarious 90-minute comedy pokes fun at the news headlines through topical comedy and song (a la Saturday Night Live). Winner of the Off-Broadway Alliance Award for Best Musical, NEWSical tackles everything in the news that drives us all crazy. From the highest office in the land to the lowest depths of reality TV, every star, story, and scandal gets lampooned in this musical mockery of all the news that’s fit to spoof!

The core of the licensed edition of the musical is set in your authorized performance materials. When available new material is added to the Off Broadway show, your licensed production will be notified that new bits are available and you can put them right into your production. And, unlike any other musical…you are encouraged to write a few bits of your own to make sure your local news can be featured in this topical tuner. 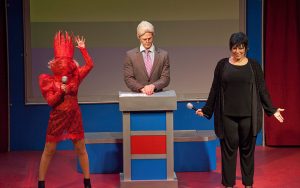 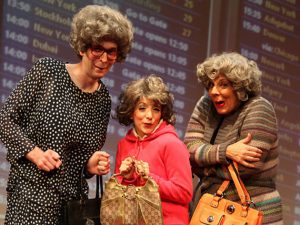 NEWSical does not follow a traditional linear plot. It is a series of sketches and scenes about the news and is performed like a live newscast.

Ensemble (includes many singing and non-singing roles, and can be done with a cast of nearly any size)