Based on the popular book by Victoria Kann and Elizabeth Kann, this is the tale of Pinkalicious, who can’t stop eating pink cupcakes despite warnings from her parents. Her pink indulgence lands her at the doctor’s office with Pinkititis, an affliction that turns her pink from head to toe–a dream come true for this pink-loving enthusiast. Alas Pinkalicious needs a way out of her pink predicament, and joined by her family they find unity and appreciation in the quirks that define us all. A staple of our TYA collection, this best-selling show continues to pack houses with pink-tutu’d fans of the irrepressible title character. 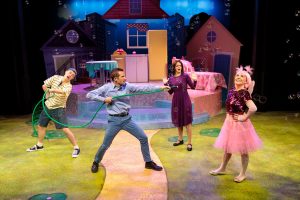 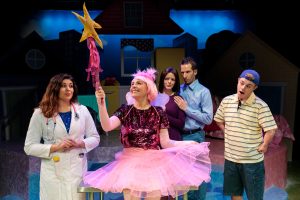 Pinkalicious loves pink and wants everything in her life to be pink. Her dream is to radiate pink. After over indulging in pink cupcakes, she wakes up pink. She is thrilled to be pink and have her dream come true. Her parents take her to the doctor, and she is diagnosed with pinkititis. On the way home, Pinkalicious plays at the playground but is attacked by birds and bees when she is mistaken for a pink flower. Her best friend doesn’t even recognize her as she is camouflaged in the garden. At home, she eats another cupcake, and the next morning she wakes up red and develops pink eye pinkititis whereby she can only see the color pink. Now she must do something to fix her predicament. She bravely follows the doctor’s order to eat green food. Due to her new resolve, Pinkalicious is transformed back to normal. Pinkalicious has learned self-control and to be careful for what you wish for. Her brother, on the other hand, has eaten the last cupcake, turns pink, and shouts with glee: Pink-A-Boo!

Based on the book “Pinkalicious” by Victoria Kann & Elizabeth Kann

NOTE: The names of the Composer, Lyricist, and Bookwriter shall be equal in size, type, coloring, boldness, and prominence. No billing shall appear in type larger or more prominent than the billing to the Authors except for the title of the play.

ALISON – Pinkalicious’s best friend who also wants to be pink

Check out this awesome website for all things PINK! ThinkPinkalicious.com