In this wild spoof of Shakespeare’s timeless tale, Romeo yes, THAT Romeo – awakens and finds himself in 1960 Brooklyn, chasing a girl he believes is his beloved Juliet. But no, it’s Bernadette, the beautiful, foul-mouthed daughter of a crime family.

“One of the great joys of Off-Broadway theatre is the discovery of new talent. There is no better example than the two young leads in the engaging musical, ROMEO & BERNADETTE (at Theatre 555). Nikita Burshteyn and Anna Kostakis are lighting up the stage in their title roles. Mark Saltzman’s devilishly clever book and lyrics (attached to melodious Italian standards) are a sheer delight. ROMEO & BERNADETTE is a fable, drawn from the Bard, providing rich humor. It has arrived in time for Spring and Summer, making it the hot musical comedy spot on West 42nd St.” – David Rothenberg on WBAI (May 17, 2022)

“THE PERFECT COMBINATION OF LOVE AND LAUGHS! To describe Saltzman’s show as something that simply ‘works'” is a complete understatement. It’s quite exciting to see a piece of theater fully take charge of itself, and Romeo & Bernadette is truly a model citizen of Off-Broadway productions. Say “fuhgeddaboudit!” to any show you were thinking about seeing this week and allow Romeo & Bernadette to sing, dance and perhaps even throw some Italian charm into your life instead.” – Kristen Morale, BroadwayWorld.com 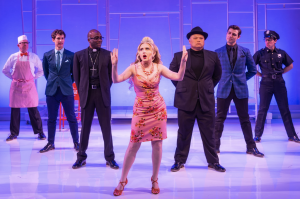 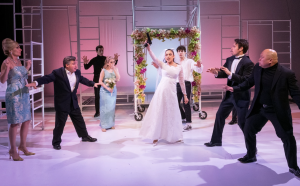 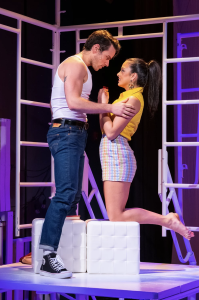 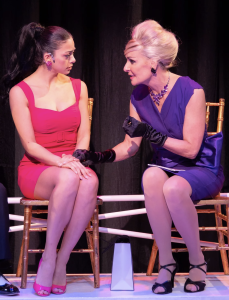 You just thought he was dead! Romeo, that is. No, he didn’t die when he drank that poison at the end of Romeo and Juliet. Because it wasn’t poison at all; just a sleeping potion that put him out for a few centuries. And when Romeo awakens, he finds himself in 1960 Brooklyn, chasing a girl he believes is his beloved Juliet. But no, it’s not Juliet—it’s Bernadette, the beautiful, sassy daughter of a local mobster. Romeo finds himself aligned with the rival crime family and… poor Romeo! It seems he’s got what the therapists would call, “a pattern.” But unlike Shakespeare’s account of the tale, Romeo and Bernadette barrels along with dames, dons and dizzy comedy to a happy ending, accompanied by some of the world’s most recognizable Italian melodies, famous from movies, television and many, many pizzerias.

ROMEO (21-30; tenor, strong high A, falsetto or strong B): the Shakespearean character himself! Dashing, passionate, courtly, irresistibly handsome, swashbuckling, innocent, in pursuit of Bernadette. (“A World Away”)

(Another option is to have these roles played by ensemble/chorus members “LIPS” (35-50; character baritone to F-sharp): gruff, all-business, (but surprisingly heartfelt) tough-guy bodyguard. New York accent.