A new musical lovingly based on Lucy Maud Montgomery’s timeless classic with its unforgettable characters, ANNE OF GREEN GABLES brings the comical adventures of spunky red-headed orphan Anne Shirley to life, as she wins over her new family and the rest of Prince Edward Island, as well, with her spirit and imagination in this heartwarming story about love, family, and home. 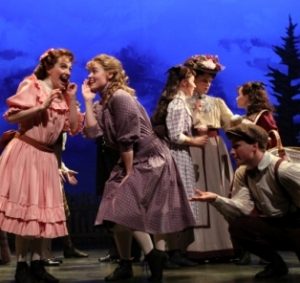 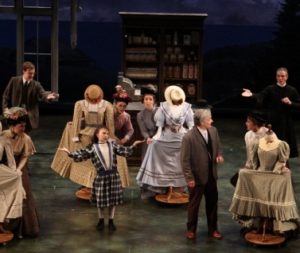 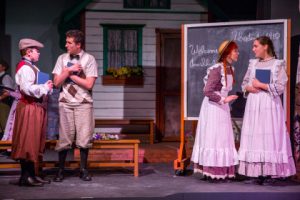 Anne Shirley, a young orphan from Nova Scotia, is mistakenly sent to Marilla and Matthew Cuthbert, a middle-aged brother and sister, who live on a farm called Green Gables on Prince Edward Island. Having sent for a boy to help out on the farm, Marilla insists that she be returned to the orphanage, but when she learns of Anne’s difficult childhood she decides to allow Anne to stay and raise her properly. With a vivid imagination, the red-headed, freckle-faced Anne takes much joy in life and is never at a loss for chattering about how she feels – often driving the prim, duty-driven Marilla to distraction. But shy Matthew falls for her immediately, and they become what Anne calls  “kindred spirits.” Audiences will delight in Anne’s humorous adventures at school – her friendship with Diana Barry, her “bosom friend” – her academic rivalry with classmate Gilbert Blythe who, having teased her about her red hair, earned Anne’s instant and ongoing hatred – and Anne’s endearing way of getting into trouble, yet finding ways to make it all work out. The once quiet lifestyle of the small farming community will never be the same. Near the end of the musical, the happy anticipation of Anne furthering her education and earning her teaching certificate is turned to sadness when her friend, the kindly  Matthew, suddenly dies. Soon after, Marilla decides to sell the farm at Green Gables – as she cannot manage it on her own. Learning of this, Anne decides to give up her ambition of going away to school and stay at Green Gables to care for Marilla and help manage the farm. When Gilbert hears of Anne’s self-sacrifice, he offers his help – and the two finally reconcile.  Anne, however, is determined and stubborn as ever. She decides that she will earn her teaching degree at home through correspondence, that she and Marilla will be just fine, and that “all’s right with the world.”

CAST (See notes below to increase or reduce the cast size.)

ANNE SHIRLEY An orphan girl with a vivid imagination who is mistakenly brought to the home of brother and sister Matthew and Marilla Cuthbert, and lives with them on their farm, Green Gables. Anne is stubborn, passionate, loyal, and intelligent.

MARILLA CUTHBERT An elderly single woman who raises Anne – she is stern yet caring but doesn’t let that side of her nature show.

MATTHEW CUTHBERT A bachelor farmer who lives at Green Gables with his sister, Marilla – Matthew is painfully shy and instantly likes Anne who considers Matthew a kindred spirit

GILBERT BLYTHE A handsome and smart young man who becomes Anne’s rival when he makes the mistake of teasing her about her red hair. Anne swears never to speak to Gilbert.

RACHEL LYNDE The town busybody, she likes nothing better than to share her opinion with everyone and never fails to advise Marilla on how to raise Anne.

MRS. SPENCER The woman who arranges to bring Anne to Matthew and Marilla instead of the boy orphan they requested.

MR. PHILLIPS / STATIONMASTER Mr. Phillips is the schoolmaster in Avonlea – a boring disciplinarian. He may also portray the Avonlea Stationmaster.

MRS. BLEWETT Mrs. Blewett – a nasty, stingy woman living in Avonlea who offers to take Anne in as a babysitter, maid, and cook when she learns that Marilla intends to replace her with a boy orphan.

MINISTER / DOCTOR The Minister is a kindly man who is the religious leader for the people of Avonlea. DOCTOR is the Neighborhood Doctor of Avonlea

JANE ANDREWS A plain and sensible girl in Anne’s group of friends – she is steadfast and reliable.

JOSIE PYE A girl in Anne’s class – a “born trouble-maker” – who likes Gilbert and resents Anne for the feelings he has for her.

RUBY GILLIS / SHOP GIRL Ruby Gillis is one of the girls in Anne’s class. The Shop Girl sells Matthew the Puffy Sleeves dress.

MOODY SPURGEON One of the boys in Anne’s class at the Avonlea school who never ceases to get into trouble.

NOTE: To increase the cast size – Additional cast members can be added as townspeople, schoolchildren, etc. – or doubled roles may be played by two separate actors. To reduce the cast size – You may consolidate the lines spoken by JANE ANDREWS and RUBY GILLIS into the character of JANE ANDREWS. The SHOP GIRL, in turn, could then be doubled by the actor who plays JANE or JOSIE. You may also eliminate the role of TOMMY SLOAN and reassign his lines as desired. One actor could also double the roles of MRS. BLEWETT and MRS. BARRY.