Since its electric Broadway and West End debut in the early 1970’s, GREASE has remained one of the world’s most popular and enduring musicals. Funny, frank and featuring the hit songs “Greased Lightnin’,” “Hopelessly Devoted to You,” “You’re The One That I Want,” and “Summer Nights,” GREASE follows the journey of Danny and Sandy, alongside the Burger Palace Boys and the Pink Ladies, as they navigate high school to the unforgettable rock n’ roll soundtrack that defined generations.

For productions in Australia, New Zealand, Singapore and Malaysia our global sub-agents can assist you. TRW’s UK office handles all other territories. Please see our Contact Us page for sub-agent contact information.

Notice to all UK & ROI producers of the musical Grease: All of the songs as included in the musical Grease are provided and authorized by TRW for your performance use in the musical. A recent directive from the copyright owners and authors of Grease prohibits the use of songs from Grease for any other purpose. This directive does not involve performing the songs under license from TRW when presenting the full musical. 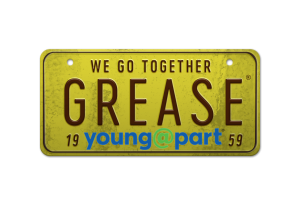 In 1959, Rydell High School’s students are starting a new year. (“Alma Mater Parody”). Sandy Dumbrowski, the new girl at school and Danny Zuko, the leader of the ‘Burger Palace Boys’, had a brief love affair over the summer. Sandy recounts her version of the fling to the ‘Pink Ladies’ (Jan, Marty, Frenchy, and Betty Rizzo), while Danny tells the Boys (Roger, Doody, Sonny, and Kenickie) his rendition (“Summer Nights”). Sandy and Danny soon bump into each other at school, and while Sandy is happy to see him, he plays it cool. Meanwhile, the kids gather in the hall as Doody shows off his new guitar. The rock star wannabe gives an impromptu concert in the hall (“Those Magic Changes”). At Marty’s pajama party, the girls experiment with wine, cigarettes, and pierced ears, and talk about boys. Marty tells about her long-distance courtship with a Marine (“Freddy, My Love”). Meanwhile, the Burger Palace Boys are busy stealing hubcaps and teasing Kenickie about his new (used) car (“Greased Lightning”). Danny sees Sandy again and tries to apologize for his behavior, but she is hurt to find out that he has told his friends that she is “easy.” Head cheerleader Patty Simcox interrupts to prompt Sandy to join the squad and to tease Danny about his latest indiscretions (“Rydell Fight Song”). The kids take their newfangled portable radios for a rock and roll picnic in the park and plan how they will pair off at the upcoming school prom, while Roger shares his love for Jan and his favorite hobby (“Mooning”). Rizzo teases Danny for falling for a girl who resembles the excessively proper teenage ingénue, Sandra Dee (“Look at Me, I’m Sandra Dee”). Sandy realizes that Danny is putting her off to be cool and wishes she had never met him. Then Danny suggests that Marty go out with Eugene, and she chases after him. Act I ends with a spirited pledge of friendship (“We Go Together”).

At the High School Hop, everyone is dancing, except Sandy (“Shakin’ At the High School Hop”). She is home feeling sorry for herself (“It’s Raining on Prom Night”). Meanwhile, favorite radio DJ Vince Fontaine, is warming the kids up for the hand-jive dance contest. Kenickie dumps his blind date, Cha-Cha DiGregorio, and pairs up with Rizzo. Danny and Cha-Cha then proceed to win the dance contest (“Born to Hand Jive”). A few days later at the Burger Palace after school, a couple of the guys run into Frenchy, who flunked out of Rydell and has now dropped out of beauty school (“Beauty School Dropout”). Danny, who has taken up running in order to win back Sandy’s affections, does not know that Cha-Cha’s boyfriend’s gang has challenged the guys to a rumble. He is more concerned about patching things up with Sandy at the Twi-Light Drive-In, but he moves too fast for her, and she leaves (“All Alone at a Drive-In Movie”). A couple of days later, the “greasers” are having a party in Jan’s basement, as Doody and Roger sing “Rock ‘n’ Roll Party Queen.” Rizzo is worried that she is pregnant, but she is so mad at Kenickie that she tells him he is not the father. Rizzo rejects the kids’ offers of help, especially Sandy’s (“There Are Worse Things I Could Do”). Sandy wonders what she needs to do to fit in at Rydell (“Look at Me, I’m Sandra Dee Reprise”). The next time Sandy meets up with the Burger Palace Boys and the Pink Ladies, she has transformed herself into a greaser’s dream date (“All Choked Up”). Rizzo reveals that she is not pregnant, and she and Kenickie reunite. All ends happily (“We Go Together-Reprise”).

Book, Music, and Lyrics by Jim Jacobs and Warren Casey

Opportunities for featured casting in the ensemble

Danny Zuko – The leader of the Burger Palace Boys; good-looking, strong and confident, with an air of easy-going charm

Betty Rizzo – Leader of the Pink Ladies; tough, sarcastic and outspoken but vulnerable

Frenchy – a dreamer; good-natured but not too smart, she is heavily made up, fussy about her appearance, particularly her hair. She can’t wait to finish high school so she can be a beautician

Marty – the ‘beauty’ of the Pink Ladies; pretty and looks older than the other girls, but betrays her real age when she opens her mouth. She tries to act sophisticated

Jan – Funny, loud, compulsive eater and awkward member of the Pink Ladies. Loud and pushy with the girls, but shy with boys

Doody – the youngest of the guys; small, boyish and open, with a disarming smile and a hero-worshipping attitude towards the other guys. He also plays the guitar

Kenickie – the second in command of the Burger Palace Boys; tough-looking, tattooed, surly and avoids any show of softness. He has an offbeat sense of humor

Sonny LaTierri – a member of the Burger Palace Boys; funny Italian-American, he is a braggart and wheeler-dealer who thinks he’s a real lady-killer

Roger – the anything-for-a-laugh stocky type of boy; a clown who enjoys winding people up, he is full of mischief and is always dreaming up half-baked schemes and ideas

Cha-Cha, aka Charlene DiGregorio – the best dancer at St. Bernadette’s; a loud mouth, she wins the dancing competition with Danny

Eugene Florczyk – the class valedictorian; physically awkward, with weak eyes and a high-pitched voice. He’s a typical teacher’s pet – both smug and pompous, but gullible

Patty Simcox – a typical cheerleader; attractive, athletic, sure-of-herself, but can be given to bursts of disconcerting enthusiasm. She’s a bit of a pain and unpopular with the Pink Ladies, and can twirl a baton

The Pink Ladies – the club-jacketed, gum-chewing, hip-swinging girls’ gang who hang around with the Burger Palace Boys

The Burger Palace Boys – A super-cool, DA-haired, hard-looking group of high school wheeler-dealers… or so they think

Costume Holiday House has added GREASE to their rental inventory.