Britt loves making everyone happy, but this girl who never gets in trouble is in a sticky situation. She woke up with a massive wad of gum stuck in her hair! All of Britt’s friends are depending on her parents to take them to Captain Happy’s Jumpy-Fun-Super-Bouncy Indoor Place, so Britt can’t let them down. Britt joins her friends on an adventure across the neighborhood to solve her problem before her parents find out and possibly cancel the trip. Mischief, hilarity, and hijinks ensue! 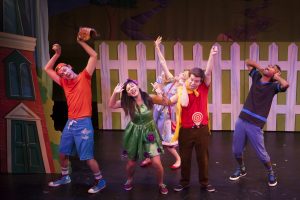 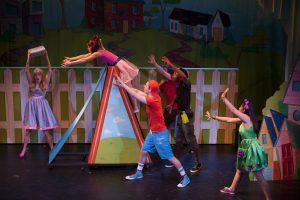 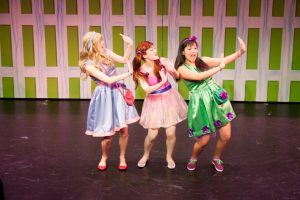 Every kid gets into some kind of trouble, and that’s no different for the kids of Morningside: Billy, Max, Jen, Hannah and Johnny. They promise the audience they always make up for whatever they did, so it’s okay to be a StinkyKid. Then there’s Britt: She never gets in trouble.  And she loves to make her friends happy.  In fact, she’s convinced her parents to drive everyone tomorrow to the brand new MegaJumper 3000 at Captain Happy’s Jumpy-Fun-Super-Bouncy Indoor Place. Jen and Hannah, her two best friends, fight over who will sit next to Britt. They press her to decide who’s her number one bestest best friend, because no one can like everything the same.  Britt says she can.  Jen and Hannah each offer Britt a piece of gum as a test. Britt makes peace by taking both pieces, and chews a huge wad of gum.

The next morning she wakes up with a huge pink wad in her beautiful red hair. She fears catastrophe: that her parents will cancel the Captain Happy’s outing if they find out she didn’t listen to them when they told her not to go to bed while chewing gum. Hannah and the boys each arrive one by one and try to use his or her mischievous skills to find a solution. Despite Max’s brawn, Hannah’s ingenuity, Johnny’s wackiness and Billy’s science knowhow, nothing works.  Hannah swears she will help Britt no matter what – after all, she is Britt’s number one bestest best friend, not Jen, right? Britt decides to take a desperate measure: she learns from one of Billy’s science books that canola oil will get gum out of anyone’s hair, so she will trek all the way down the street to Foodarama to buy some. Though she doesn’t want her friends to get into trouble, they head out on the adventure with her.

Johnny catches up with Jen, who feels left out (she was late to Britt’s house because she was brushing her hair).  When Johnny admits no one brought any money with them, Jen comes up with a brilliant plan: She steals her charity box. After all, she saved her extra change for people in need, and Jen NEEDS to be with her best friend – especially since Hannah has been with Britt all this time. Jen joins the gang and gives the box to Britt.  She asks Britt if she’s now her number one bestest best friend instead of Hannah, but before Britt can answer, she discovers the box won’t open. Her friends try to convince Britt that it’s time to go home, but she gets in touch with her inner StinkyKid and persuades them to try to open the box by any means necessary. Hannah and Jen realize they have one thing in common: they’re worried about Britt’s poor behavior.  Fighting each other won’t help Britt, who has climbed all the way to the top of a slide and hurled the box to the ground.  Good news: they have the money. Bad news: the ice cream truck arrives. All of Britt’s friends want to get a cone, using their newly rescued money. Britt refuses to give over the money and accidentally knocks Jen to the ground.  She gives back the “stupid” box, shocking everyone that she used the “S” word.  Everyone wants to go home, so Britt makes the most rash move ever: She cuts the gum out of her hair!  Worse, she says they don’t need her parents to drive. They walked this far; they can walk to Captain Happy’s.

That’s the last straw.  Her friends decide to go home, because it’s the right thing to do – which Max refers to as being a “Leader of Good.” Britt, alone, lashes out that she can do this alone, but then weighs the good vs. bad of her situation. She comes to a heartfelt conclusion: Today, for the first time ever, she relied on her friends. They would want her to do what’s right.  She’ll go home, too. Too late: her mom finds her and grounds her.  That’s very long time out. After five days alone in her room, Britt resolves to stay in time out forever. She fees bad that she almost stole money from the charity box – money that was supposed to go to people who don’t have anything.  How can she ever make it up to them? She scours her room to find items to donate to charity. Her parents admire her ingenuity, and encourage her to ask her friends to help.  Britt’s afraid they might not want to play with her, but her mom says she’ll never know if she doesn’t leave her room. Britt leaves her room and finds her friends playing together – Jen and Hannah are even getting along.  She apologizes to everyone. They forgive her: it was a whole five days ago.  Even better, Jen and Hannah tell her that they’ll both be Britt’s best friends.  Britt confesses she’s can’t – and most likely won’t – be all good all the time, but vows she will always try to find a way to make up for whatever she did.  She then leads everyone to the charity place – which happens to be right next to Captain Happy’s!  After all, she’s the gum that keeps everyone sticking together.

All characters are 6 years old (except Hannah, who’s proud to be 7), usually played by actors teenaged or older.

Any parent is portrayed by pre-recorded musical instrument sounds.

BRITT (F) A people-pleasing mediator type who usually puts others first, she walks on the wild side for the first time, learning how to depend on her friends and that it’s okay to make a mistake.

JEN (F) The princess of the group. Passionate yet self-centered, she has a big heart. Desperately fighting with Hannah to be Britt’s “BFF”.

HANNAH (F) Savvy and sassy friend of Britt’s, she’s always trying to outsmart Jen to become Britt’s official “BFF.” Ethical but bossy, she has an artistic streak. Usually played by an Asian actress.

MAX (M) Athletic, the literal minded “heart” of the group. The reactive straight man to the zany antics. Often repeats advice from his buddy at the retirement center where he volunteers.

JOHNNY (M) Impulsive yet endearing, the prankster who loves to make ‘em laugh. The most “larger than life” one in the show, it helps to cast an actor with an Improv background.

BILLY (M) A brainy and creative inventor.  Resourceful yet cunning, he competes with Max in sports. Usually played by an African-American actor.