Inspired by and featuring the songs of Elvis Presley®

It’s 1955, and into a square little town in a square little state rides a guitar-playing young man who changes everything and everyone he meets. Loosely based on Shakespeare’s Twelfth Night, this hip-swiveling, lip-curling musical fantasy will have you jumpin’ out of your blue suede shoes with such classics as “Heartbreak Hotel,” “Hound Dog,” “Jailhouse Rock,” and “Don’t Be Cruel.” 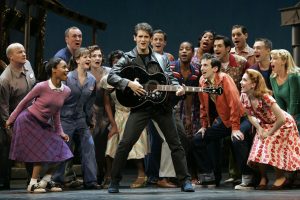 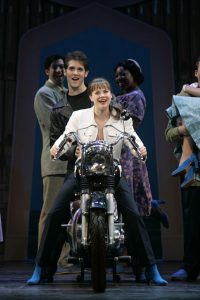 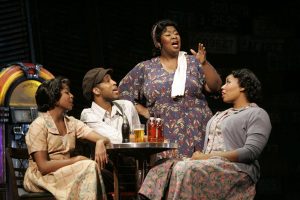 In the midst of the abandoned fairgrounds, the citizens of the town are restless and randy (“All Shook Up”). Dennis comes upon Natalie, who’s still dressed as Ed, and Dennis reveals that he’s upset about the way Chad treats her (“It Hurts Me”). Natalie insists that Chad is the only guy for her. In an attempt to win Chad, Natalie gets an idea—she convinces Chad to teach her (i.e. Ed) how to seduce a woman (“A Little Less Conversation”) but in the process, Ed winds up kissing Chad. Chad is stunned and Ed runs off as Jim enters. Chad reaffirms his machismo (“Power Of My Love”) when Jim and Chad suddenly realize they are both in love with the same woman. Sandra enters, lustfully looking for Ed. Jim confesses his love for Sandra, but she doesn’t even remember meeting him. As the heartbroken Jim slinks off, Ed enters, and he insists that Sandra leave them alone. Sandra, still hot for Ed, relents and promises to find him later. Left alone, Chad is about to hit Ed, but he realizes that he can’t. Ed gives Chad some “alone time”, and Chad realizes that he has feelings for his new sidekick (“I Don’t Want To”). In another part of the fairgrounds, Mayor Matilda enters, followed, as always, by the silent Sheriff Earl, and she vows to bring the roustabout down (“Devil In Disguise”). A heartbroken Jim wanders about and runs into Sylvia, who is wearing her best Sunday dress. He wonders what she’s doing out there this time of night, and she confesses her newfound feelings for him (“There’s Always Me”). Jim can’t handle this revelation, and he rushes off. In another part of the grounds, Dean and Lorraine plan to catch the morning train out of town, but Chad convinces them to stay and fight for their love (“If I Can Dream”). In the center of the fairgrounds, Matilda gathers the townspeople together to form a pious posse to both find her son and arrest Chad. But Chad enters, as does Dean and Lorraine—and the final confrontation begins… Will true love prevail? (“Fools Fall In Love”) Will the power of music win the day? Will this small town in the Midwest survive getting all shook up? These questions and more are answered as the characters come together for the finale (“Burning Love”).

Inspired by and featuring the songs of ELVIS PRESLEY ®

Opportunities for flexible casting in the expandable ensemble.

MISS SANDRA: the beautiful, intellectual caretaker of the town’s museum.

DEAN HYDE: Matilda’s 16 year-old son. He has grown up at a military boarding school.

The Music and Theatre Company